Conventional energy sources lose weight in the energy mix of the country. NCRE generation increased its contribution to the electricity grid, currently recording a share of 10.1%.

An unprecedented growth in the market have Non-Conventional Renewable Energies (NCRE), especially wind and solar. In the last four years-from 2011 to 2015, the installed capacity such sources increased 391% or increased fivefold, from 540 MW to 2,649 MW, according to data from the Chilean Association of Renewable Energies (ACERA).

In the same period, the installed capacity of conventional generation – large hydroelectric and thermoelectric plants – increased only 33%, and went from 13,553 MW to 18,088 MW.

Since 2011, NCREs have grown at double-digit rates higher and even reached 75% increase in 2014. Quite the opposite has occurred in the path of traditional energies, showing a downward trend and in 2015 only increased 2 %.

Carlos Finat, executive director of ACERA and former mining executive of Dña Inés de Collahuasi, estimates that the percentage growth of NCRE shall remain in double digits in the next two years, although it will be more moderate than the average for the last time, as the installed power against which the percentage calculated begins to be significant.

The peculiarity of this market is that, unlike other countries, has shown a significant increase without subsidies. And beyond the installed capacity it has also risen considerably the energy generated in the power system by such sources. In the last five years-from 2010 to 2015, the indicators show that the contribution of NCRE has grown 843%, which corresponds to an advance of its share in total power generation, from 1.5% in 2010-10 , 1% currently.

According the renewables association, the participation of conventional generation, meanwhile, decreased in the same period: went from 98.5% in 2010 to 89.9% in 2015, 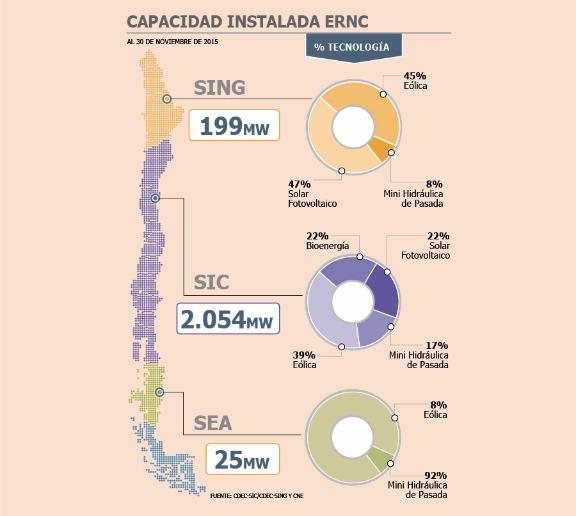 Chile is an attractive country to invest in this type of energy sources. Carlos Finat says the first thing is the quality and quantity of renewable energy resources available in the country, as there is water, wind, solar, geothermal, sea and biomass and biogas sources. On the other hand, it is the high cost of conventional generation sources, the increasingly obvious concern for sustainability friendly projects and the environment have citizenship. At the same time, «Chile maintains its reputation as a serious country, with clear and stable rules for foreign investors», says the executive.

In the last tenders for electricity supply to regulated customers it was evident mainly households-that are competitive NCRE sources, since most of the energy blocks it awarded such companies. In that process they were offered prices 50% lower than in 2013, when they also were very few companies participating in tenders.

In the market, some have criticized this increase without limits NCREs, since not having enough capacity transmission lines to all available generation, some complexities occur in the system and even overcosts.

Finat recognizes that «if there is no line development according to the needs of generation or technologies and operating procedures and appropriate coordination do not apply, there may be drawbacks.» But he warns that in ACERA are quiet because they are making policy changes to ensure these conditions.

In this sense, the current transmission bill, now in Congress, is essential for the proper development of the electric system. The executive believes necessary to advance land use planning, to ensure a proper balance between national and regional interests.
To Finat, the few conventional projects submitted to the Environmental Assessment Service undoubtedly show that some of these sources are already in retreat.