Lithium is the new «mining star» in TSX-V

Lithium is the «commodity in fashion» because the high demand of the Lithium-ion battery industries used to power computers, mobiles, iPads, electric bicycles (e-bikes), vehicles and mass energy storage systems. 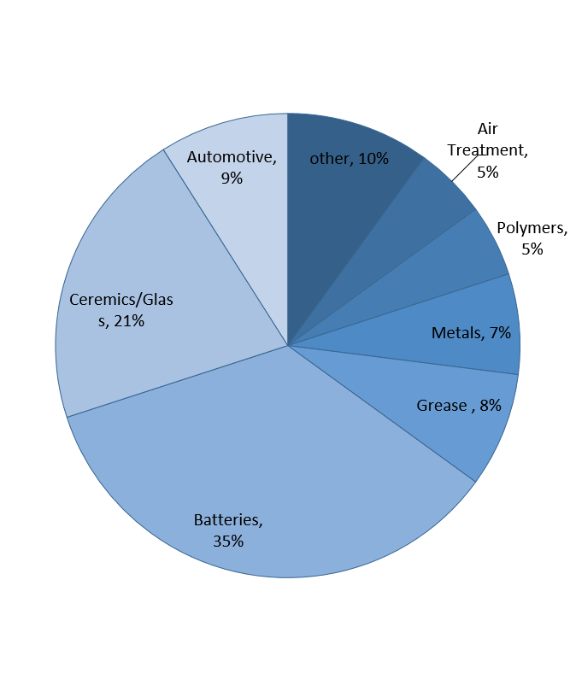 Lithium-enriched brine is the most cost-effective form of lithium production and is responsible for most of the global production. Under specific climatic and geologic conditions lithium can be concentrated naturally in very salty water referred to as brine. This process is relatively rare, and the predominant theory suggests that volcanic lithium-rich ash is deposited, entrained into water by solution, and forms a lake in low-elevation desert depressions where evaporation exceeds precipitation. Over time, water is evaporated and the salts, including lithium, are concentrated and eventually infiltrate into the ground. Brines can be twice as salty as seawater, and under certain geologic conditions, can be contained underground by impermeable rock effectively forming a bathtub-like feature. These features can be a prolific source of accessible and concentrated lithium, and are known to be found in Nevada, Atacama (Chile, Bolivia and Argentina), and Tibet.

Before 1997 lithium production was predominantly hardrock-sourced from the USA, Russia, Chile, Australia, China, Zimbabwe and Canada. However during 1997 Sociedad Química y Minera de Chile (“SQM”) began processing lithium product from continental brines in the Salar de Atacama region. The lower cost and larger volume of production of this brine-sourced lithium changed the shape of the industry, thus forcing the closure of many high-cost rock operations. The Greenbushes mine in Australia is the only significant lithium hard rock mine in the world, unique due to the highly enriched lithium mineralization.

Lithium is a specialty industrial product bought and sold under contract, and the chemistry is specifically tailored to the customers needs. Supply contracts are useful towards predicting cash flow and securing project finance. Demand is predicted to be as high as 125% of supply by 2020 driven by electric vehicles and grid storage.

VANCOUVER, British Columbia, Feb. 25, 2016 (GLOBE NEWSWIRE) — Pure Energy Minerals Limited (PE.V) (Frankfurt:A111EG) (HMGLF) (the “Company” or “Pure Energy”) is pleased to announce it has been recognized in the 2016 TSX Venture 50® as the mining sector’s top performing company. The Company ranked number one in the sector.

The development timelines of Pure Energy’s Clayton Valley Brine Project are aligned with the anticipated high-growth demand in lithium.

The 2016 TSX Venture 50™ is a ranking of strong performers on TSX Venture Exchange. These companies have shown results in key measures of market performance. The ranking is comprised of 10 companies from each of the five industry sectors, and they were selected based on three equally weighted criteria: market capitalization growth, share price appreciation and trading volume. On average, these companies have delivered a return of 77% in 2015. The shares of these companies also enjoy a liquid market, with a total of 3.0 billion shares trading over the course of 2015. Visit www.tsxventure50.com to learn more.

Pure Energy CEO Robert Mintak commented, «It is an honour to receive recognition from the TSX Group which validates the hard work and dedication of our management team and fully engaged Board of Directors.  We look forward to continuing to deliver value to our shareholders in the year ahead.»

Pure Energy is a lithium-brine resource developer that is driven to become the lowest-cost lithium supplier for the burgeoning North American lithium battery industry. Pure Energy is currently focused on the development of our prospective CVS Lithium Brine Project, which has the following key attributes:

Metal resources are critical for the development of Renewable energies, energy storage  and electric vehicles equipment. Not only Lithium, but Copper, Aluminum, etc. This is our LinkedIn Paradigm if you want to follow up these discussions:

If  you are interesting about these topics, please you are welcome to participate on the LinkedIn group about «Renewable Energy for Mining and Oil Industry».