Why Mining is liable close to 60% Solar PV at Latin America?

Renewables for Mining is an important subject in Latin American (LatAm) mining. Top 21 solar PV facilities in the region (see next table) reach a total annual production of 2,680 GWh with a capacity of 1,181 MW. This figure equals supply the 2008’s Nicaragua country total electricity demand.

The following  table, modified from the solar plaza document, which illustrates in detail the 21 bigger solar facilities (June 2016) from Baja California to Patagonia, we can observe: 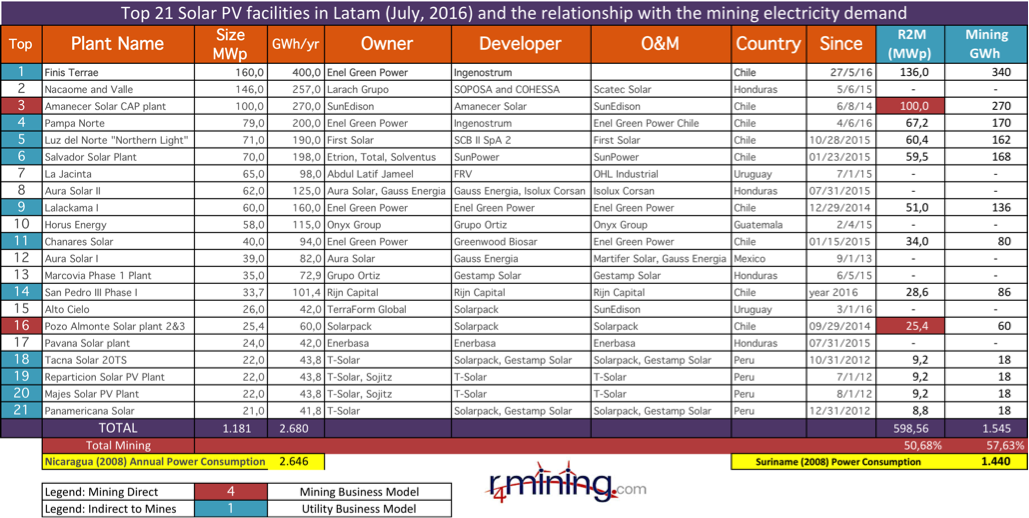 Why so huge figures to supply mining?

In order to understand the energy importance of mining, we have to get a close look in world mining and energy figures:

When analyzing Mining and Renewables markets, there is some kind of “market myopia” in terms of the use and /or the sign of PPA, which is the owner and / or offtaker. Depending on the answer of this question Renewables and Mining market shows us sensible different sizes. Maybe best example to understand the precedent concepts were in the analysis of in the Andean copper fringe between the north of Chile and the south of Peru, the main belt for copper porphyry in the Earth providing most of the copper metal for world exports and site of 13 of the 21 top solar PV LatAm current facilities.
In order to solve this analytical challenge, we propose the definition of two market segments depending on the variable linked to business model. Renewables for mining (R4M) responds to mine self-consumption ergo «mining business model». And in the other point of view the Renewables to Mining (R2M) comprises the mining energy consumption providing from the grid or «utility business model».

Depending on the location of each R2M facility the mining conversion rates change and, based on the official statistics of Chile and Peru governments it ranges from 42% in the south Peruvian installations to 85% to the northern Chilean ones. R4M’s conversion rate is 100%.

And So what?  What’s next future?

A typical market analysis about Mining and Renewables market in our example would point to a 125 MWp and 330 GWh/y market (R4M).

For a correct  market development measurement, avoiding “market myopia”, we propose the approach of the sum  R4M and R2M, applying the factor correction using official governmental statistics on mining electricity use and, in doing so,  showing better solutions for renewables’ business developers in mining regions.

During the next six months (August – December 2016) Chile will develop over 1,000 solar photovoltaic MWp installations and the mining share will increase substantially in the R2M “hidden” market.

Developers, IPP, equipment manufacturers, investors, administration and legal services need to pay attention to these details in order to develop and invest in Renewables for Mining, they should consider this mining approach to renewables to better manage existing facilities and predict future operations in the region.