Next-generation battery technologies have the potential to revolutionise the way underground mines operate and significantly slash costs. Carly Leonida looks at the current state of play

Ventilation currently represents around 50% of metal producers’ overall energy costs. Mines are looking to go deeper and still remain economic, while also eliminating fine diesel particulate matter from the underground work environment. Couple these aims with the need to achieve clean-energy targets and secure greenhouse-gas reduction benefits, and it’s clear that there are a myriad of drivers for the introduction of battery-powered vehicles that are engineered for life underground.

A mobile fleet propulsion system that can reduce ventilation, diesel engine power requirements and also deliver a health-and-safety dividend has an extremely compelling business case. And as miners have come to realise this, so interest in battery technologies has grown among the mining community. The MINExpo 2016 tradeshow held last September was the perfect gauge for this; almost every OEM was showcasing an electric-drive system, regenerative-drive technology or battery-propelled underground machine of some sort. Compare this with the 2012 incarnation where automation and EPA Tier 4 Final compliant engine technologies were the key talking points, and it’s clear that the focus of the industry has shifted somewhat.

So what has brought about this change?

“Interest is coming from two sources,” says Jani Vilenius, director of research and technology development, PA Rock Drills and Technologies, at Sandvik Mining and Rock Technology. “Battery technology is being applied more widely in other industries and, for that reason, its applicability in mining is also being questioned, creating a technology push. 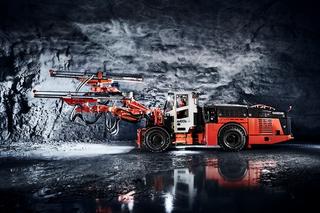 “On the other hand, future mining conditions are going to be even tougher than today, creating the need for greener and more efficient technologies. Battery cell production has ramped up in recent years to be ready for the automotive and green-energy industries. The mining industry has acknowledged that the high value of reduced ventilation and heat, and socioeconomic factors, plus the application of new battery technologies,§ may enable an increase in the productivity of underground units, giving the ingredients for new way of mining.”

Batteries of some sort or design have been around in mining for decades. However, with advances in chemistry and associated technologies such as DC motors and charging technologies, what exists now are batteries that are much more suitable and adaptable for the underground mining environment.

“On top of this is the willingness of mining companies to take on and adapt new technologies and ideas that were once not seen as a solution for widespread adoption in the mining sector,” explains Anthony Griffiths, product manager for fleet electrification at MacLean Engineering.

MacLean launched its Fleet Electrification programme in 2015. The effort resulted in three completed builds in 2016 – two battery-powered Bolters and one battery-powered Boom Truck – as well as its first EV Series fleet sale (ground support and production support) also to Goldcorp’s Borden Lake. “We have committed to having our full fleet of ground support, ore flow and utility vehicles electrified by the end of the coming calendar year,” Griffiths adds.

Of course, until a technology is proven, it’s extremely hard for it to gain traction. One project that is helping to change the way the mining industry perceives battery technology is Kirkland Lake Gold’s (KLG) Macassa mine complex in Ontario (notice the trend: the Canadians are some of the most forward-thinking when it comes to adopting new mining technologies).

Artisan Vehicle Systems, a manufacturer of electric battery-powered underground mining equipment based in California, US, worked with KLG to prove the technology as part of a production fleet.

“Prior to implementing this battery-powered fleet, other mining companies had tested a few battery prototypes with little success,” AVS’ president and CEO, Mike Kasaba, tells MM. “KLG now has more than 25 battery-powered loaders and trucks. These machines are responsible for moving more than 60% of the ore in the Macassa mine.

“Battery technology is having a real impact on KLG’s production capability. As a result, the rest of industry has taken notice and is evaluating how they too can take advantage of this new technology.”

The measurable benefits to KLG have included: faster access to rich reserves, lower capital spending on ventilation, and healthier working conditions for miners.

Battery-powered products for hard-rock mining are also in the pipeline for Caterpillar which, as the mining industry’s largest OEM, is a pretty good bellwether for a technology’s potential to become mainstream.

Jay Armburger, battery power project manager for underground hard-rock vehicles, tells MM: “Our battery programme is starting with our smaller LHDs. Our first prototype machine in trials at a Caterpillar proving ground is an R1300 that carries a 6.8t nominal payload. Design work concentrated on developing and validating new structures to handle the batteries as well as software and cab updates needed for the new propulsion system. The results of prototype testing will drive the next steps in the programme.” It is worth noting that the machines mentioned above are only a snapshot of what’s being developed and tested in the underground mining industry at present; many of the companies approached for interviews as part of this feature were not ready to talk.

There are three types of batteries currently used in underground mining equipment:

Each has its strengths and weaknesses based on the specific application.

Traditional lead-acid batteries have been used in mining for a long time, mainly in soft-rock applications such as coal, salt and potash. However, their widespread use has been stunted by their large size and heavy weight, limited energy and power capacity, limited cyclic life of the batteries and questionable safety credentials.

These batteries are similar to starter batteries found in passenger cars. They have a high power capability, but have drastically reduced efficiency and energy density when used to move higher loads. They require significant maintenance, and also suffer from ‘off–gassing’. Off-gassing is a term that refers to the chemical reaction that occurs in certain batteries, specifically in the charging/overcharging state, or when the battery starts to decay or decompose over time. A number of undesirable gases can be produced based on the battery chemistry; in the case of lead-acid batteries, that gas is hydrogen, which is extremely flammable.

“Lead acid batteries have a cycle life of between 300 and 1,000 cycles, which means they need to be replaced frequently,” says Kasaba. “Their only benefits are that they are low-cost, they’re familiar to most technicians and they don’t require much in the way of monitoring electronics.”

Lead-acid batteries also require a long charging time of several hours and, Vilenius explains, in order to meet the high power requirements of a large mining vehicle and create the steady flow of power needed for traction purposes, quite a lot of battery cells are required.

“Lead-acid batteries may provide a good counterweight for the vehicle, but they generally impose a heavy package, reducing the overall payload/power ratio,” he adds. “The best benefit of lead-acid batteries is that the recycling methods are well established and the cost per energy unit is favourable.”

Modern battery technologies are now being introduced by several companies. Some of these are still being pilot tested, but several have been accepted by the industry and market interest is increasing.

“The battery types that we have reviewed or looked at start with the traditional lead acid, then move through different chemistries such as LFP, LTO and NMC, and some other less well-known offerings,” says Griffiths at MacLean. “The benefits and limitations vary from chemistry to chemistry and each has its own pros and cons.” Energy density is the unit of measure used to indicate the potential for producing energy. Diesel fuel has a very high density rating and this makes it a good fuel source. Lead acid-based batteries have a density that is at the lower end of the current battery chemistries that are now available.

“The chemistry that we have chosen for powering our fleet has easily doubled and, in some cases, tripled the total life cycle and number of charging cycles that a traditional lead-acid battery can provide,” Griffiths adds.

AVS, meanwhile, has found that most of its mining customers prefer LFP batteries for their safety benefits, low cost and reliability.

“New battery chemistries are announced frequently, but only a few are worthy of high volume, reliable and cost-effective use. The rest never make it out of the laboratory or are extremely expensive with no path to affordability,” says Kasaba.

“The main technological advancements are in the accompanying electronic control systems. These systems enable better performance, higher reliability and longer life for batteries.”

AVS’ underground LHDs are powered by LFP and LTO batteries. “Our latest battery packs contain 30% more energy using the same space as before,” explains Kasaba. “We have also significantly improved our system’s performance in environments with high ambient heat.

“Our new system also cuts charge time in half (from two hours to one hour).”

AVS launched a prototype of its 153 LHD at the beginning of 2016. “That unit is working well and our first four production units are now in service at two mine sites,” says Kasaba. “Orders for 153s in 2017 will expand our installation base to four additional mine sites in Canada, the US and Peru.” Vilenius acknowledges that there is a continuous need for higher-energy capacity batteries, but no promising solutions are available in the near future. “Battery technology selection is a multivariable question with technical and financial aspects,” he says. “If some of the current high-energy alternatives were chosen, good properties such as safety would be compromised.”

Currently, the vast majority of underground equipment is powered by diesel. However, every major mining company in the world is evaluating the use of battery-powered machines. Several major mining companies have projects under way right now to deploy battery-based equipment for large-scale production operations and these deployments will help drive broader market acceptance.

“Mining executives are telling us that they know the industry is moving away from diesel and toward zero-emission equipment for underground use,” says Kasaba. “The tipping point for the entire industry will be driven by success stories from soon-to-be-announced large-scale deployments.

“We believe that by 2020 all RFPs [request for proposals] for underground operations will request only zero-emission equipment and any remaining diesel equipment will be phased out soon thereafter.”

Vilenius is also optimistic, although a little more reserved in his outlook: “There seems to be great market potential. There are dozens of concrete requests for battery-powered machines from mines. Volumes will still be moderate over the coming five years though; it will take decades for electric machinery to become mainstream.”