The replacement won’t be for one of the renewables, but for a mix of all:

Video 2: Electric Cars Could Wreak Havoc on Oil Markets Within a Decade

February 24, 2016 – There are more than one billion cars on the road worldwide today, and only one tenth of one percent of them have a plug. OPEC contends that even in the year 2040, EVs will make up just one percent. But don’t be so sure. By 2020, some electric cars and SUVs will be faster, safer, cheaper, and more convenient than their gasoline counterparts. What if people just stop buying oil? In the first episode of our animated series, Sooner Than You Think, Bloomberg’s Tom Randall does the math on when oil markets might be headed for the big crash.

One of the most interesting concepts of the precedent video is the application of «S Curve» to the electric vehicles as you can observe in next to images: 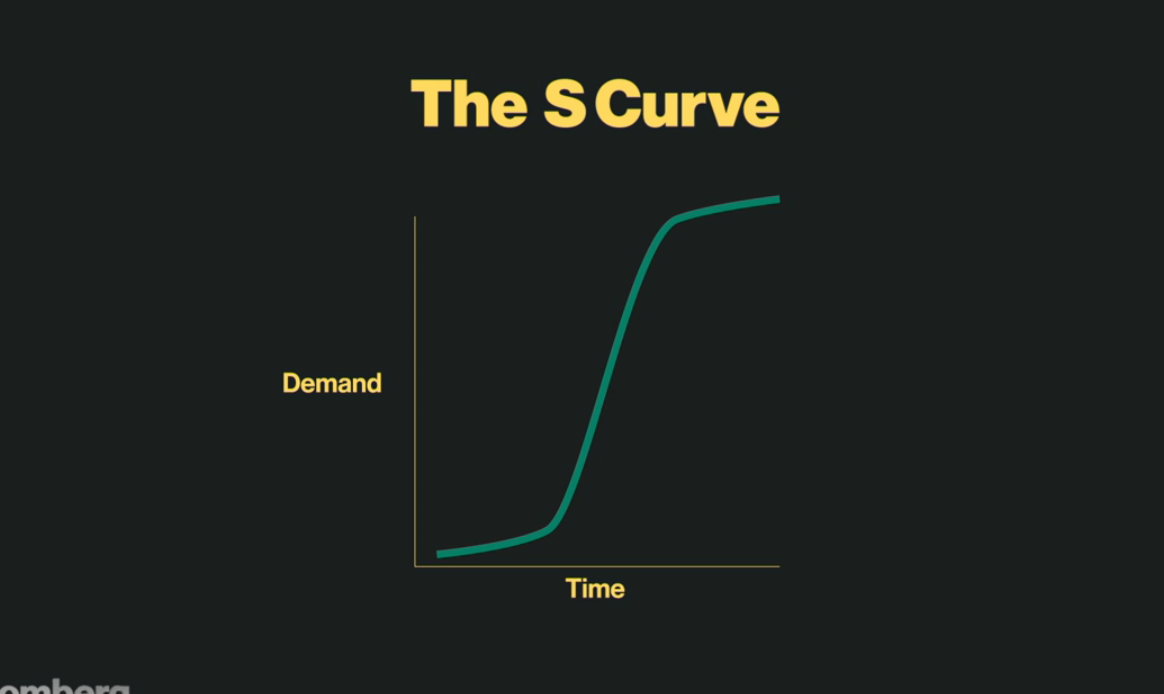 The «S curve» application to technologies has been demonstrated in the refrigerator, color TV, Computer and Cellphone markets (see next future) 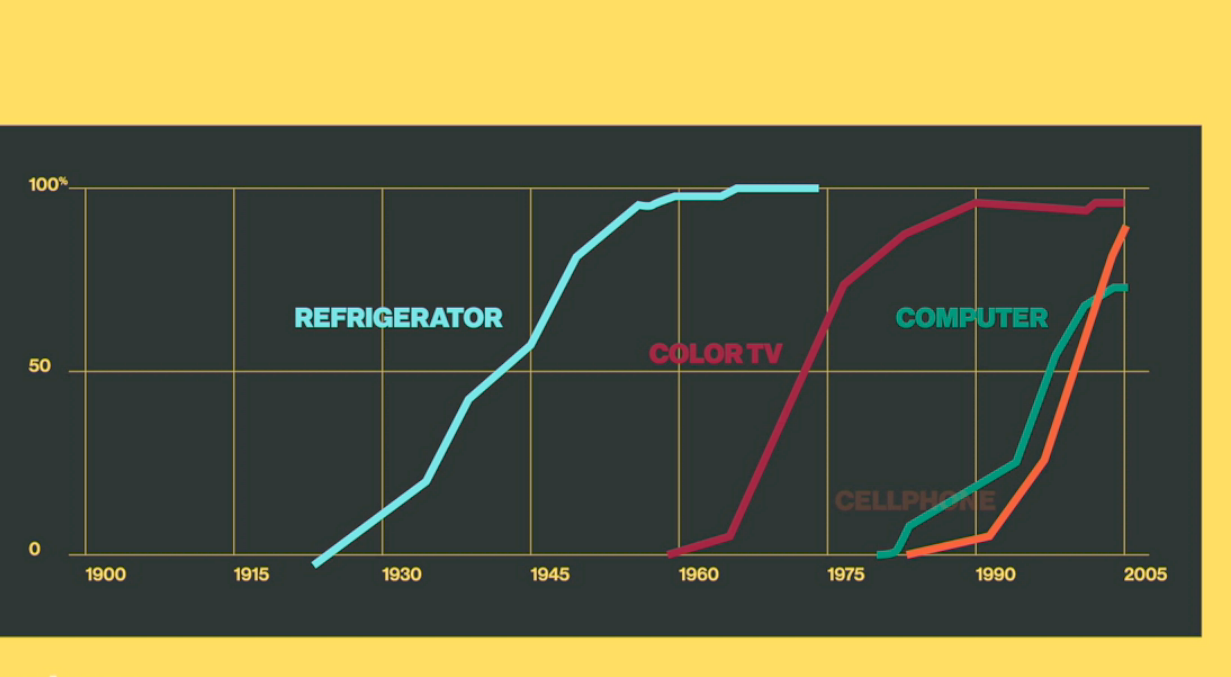 The «S Curve» to Electric Cars 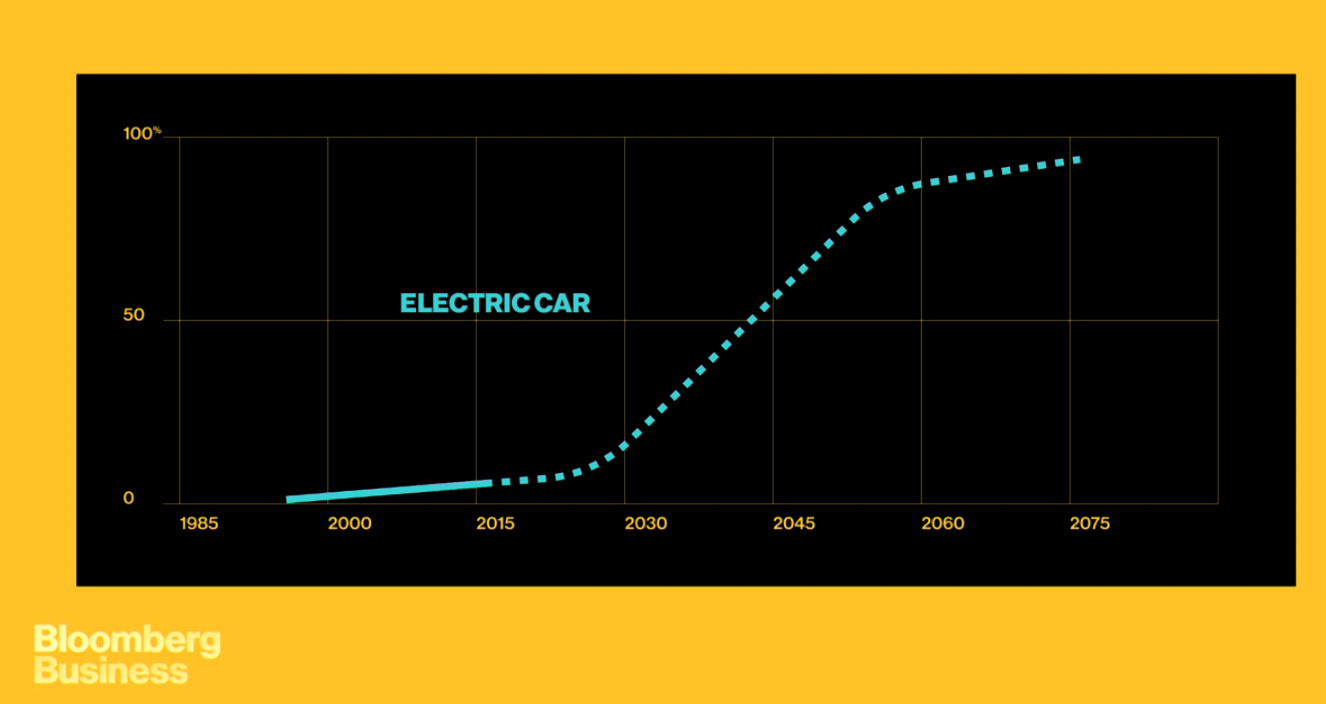 And what about when we apply this forecast to Mining?

Mining requires around the 10% of prime energy in the world. Even with expected one third increase of global energy demand by 2030 (IEA; 12015), mining share would achieve 15-17%%, this growing forecast about mining energy consumption would be spectacular driven by global metals demand and deep drop of mineral law. If we follow the Bloomberg’s forecasts (precedent  videos: 50% of Electric Vehicles by 2040) and we apply to mining … the business as usual disruption in mining would be colossal. 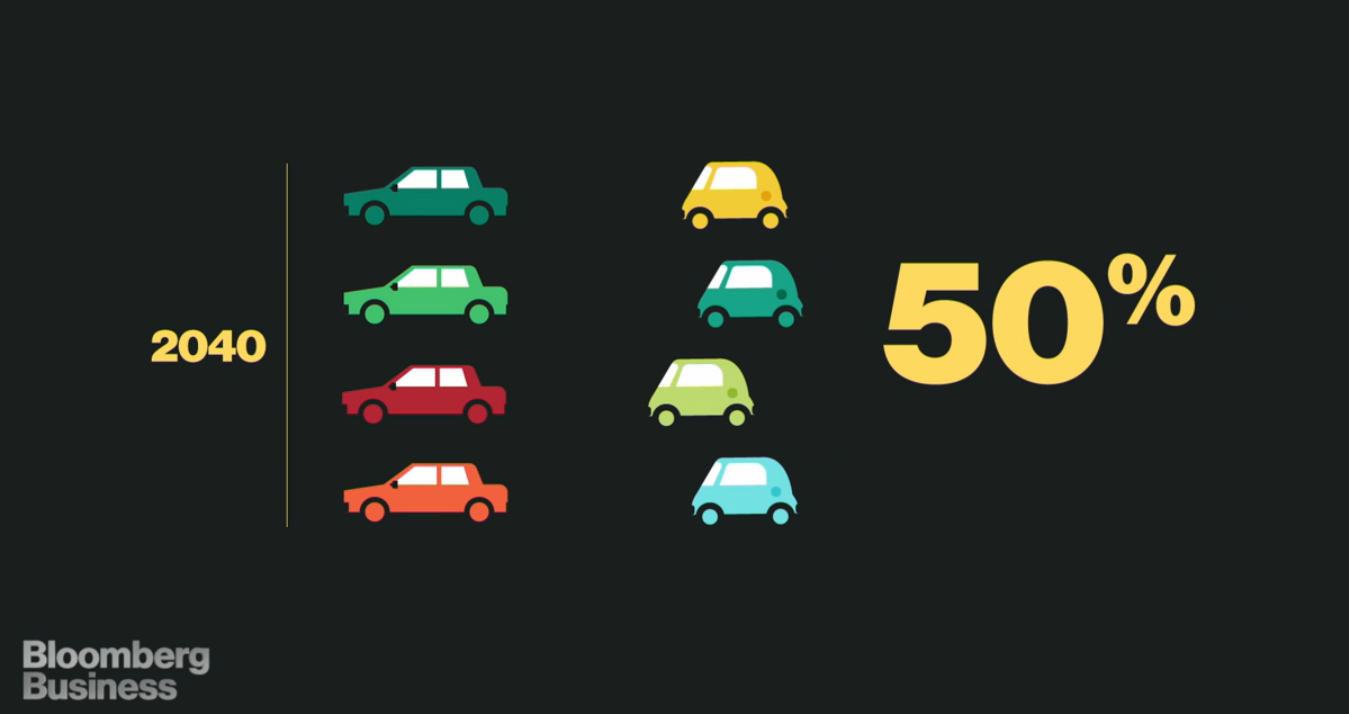 Mining vehicles do not have the problem of autonomy and there are 8 value propositions of Electric Vehicles as we mentioned in a previous article (Why a Tesla business model is compelling for the mining industry?). Because these ideal characteristics EV for mining and the Bloomberg’s forecast, we can assume safely that the share of electric vehicles arrive before 50% than the rest of the world market. Thus EV penetration 50% should be by 2035. This scenario will mean a market disruption of diesel providers and transport equipment for the industry and, collaterally, it will double the electricity market for mining, mainly renewable energies. It would be likely see even burning coal (or gas) to produce electricity to charge batteries in mining trucks. 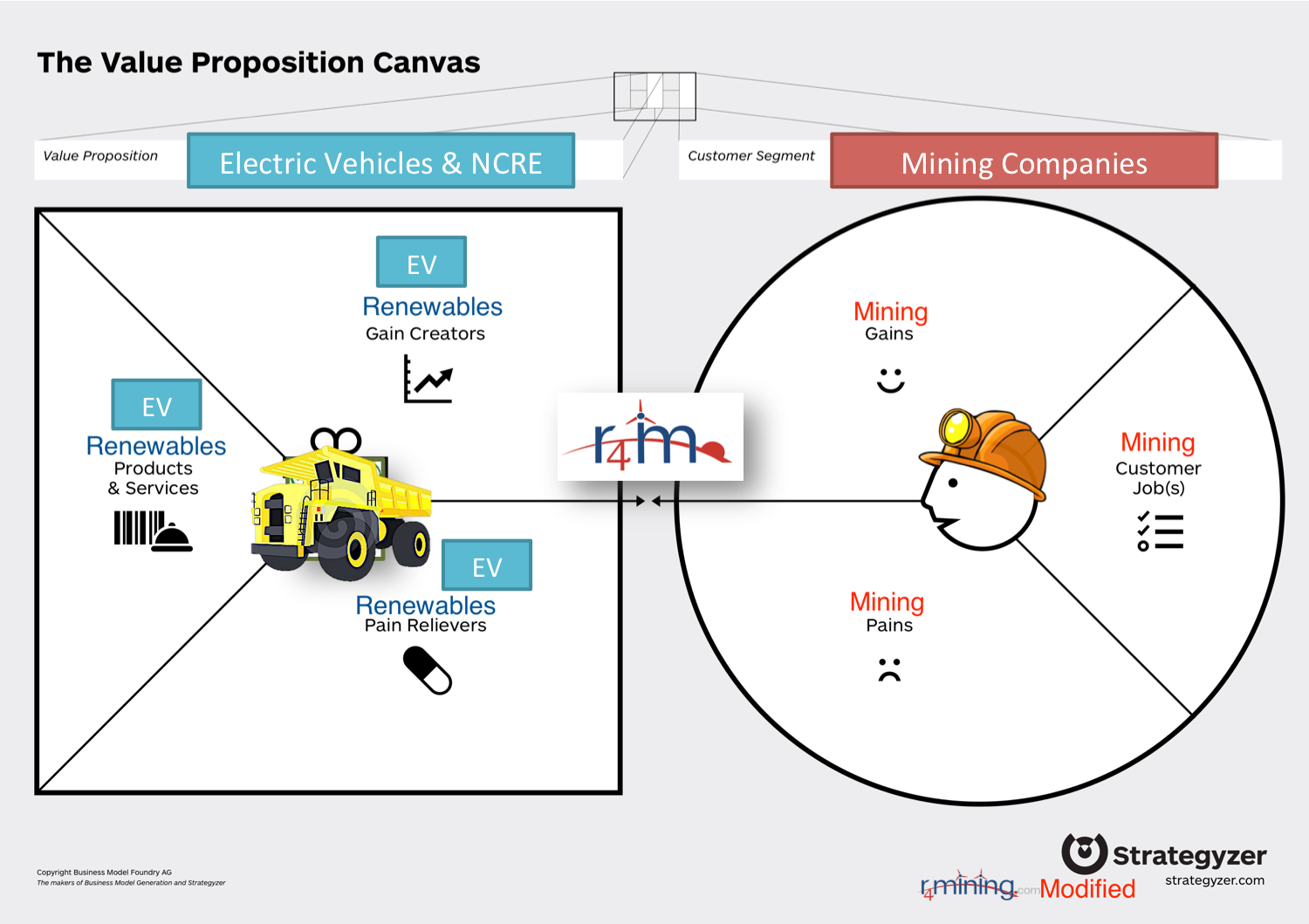 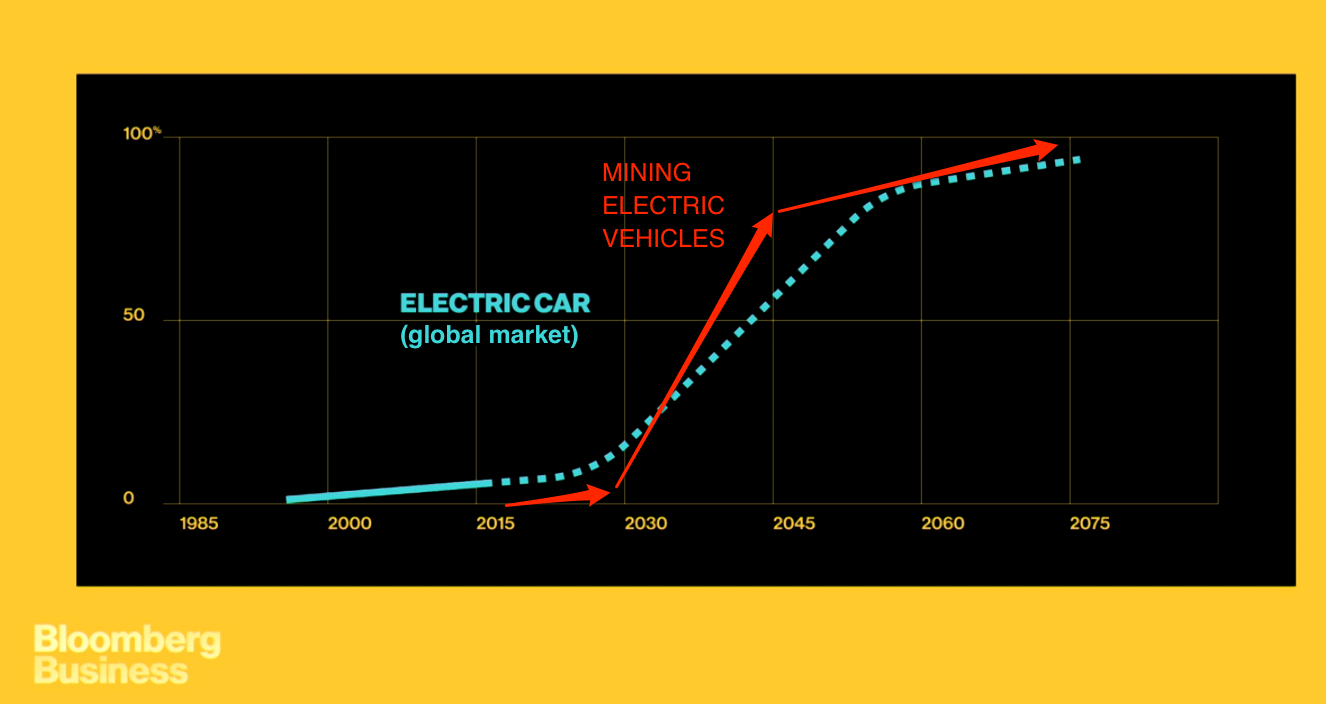 If  you are interesting about these topics, please you are welcome to participate on the LinkedIn group about 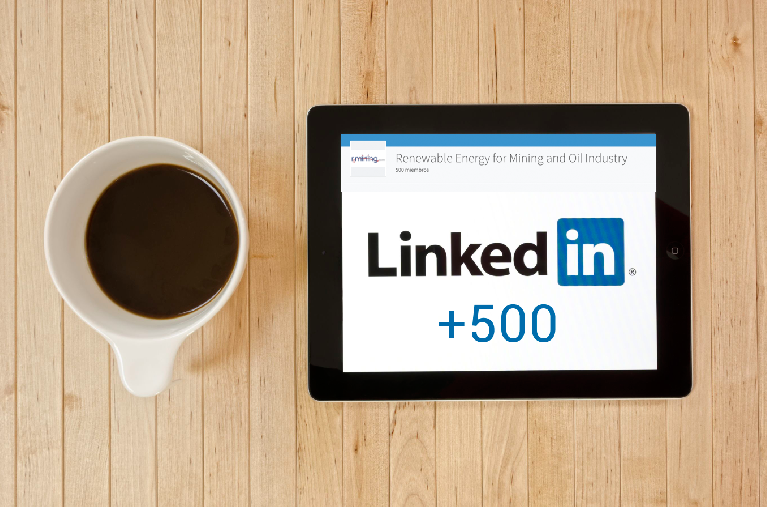